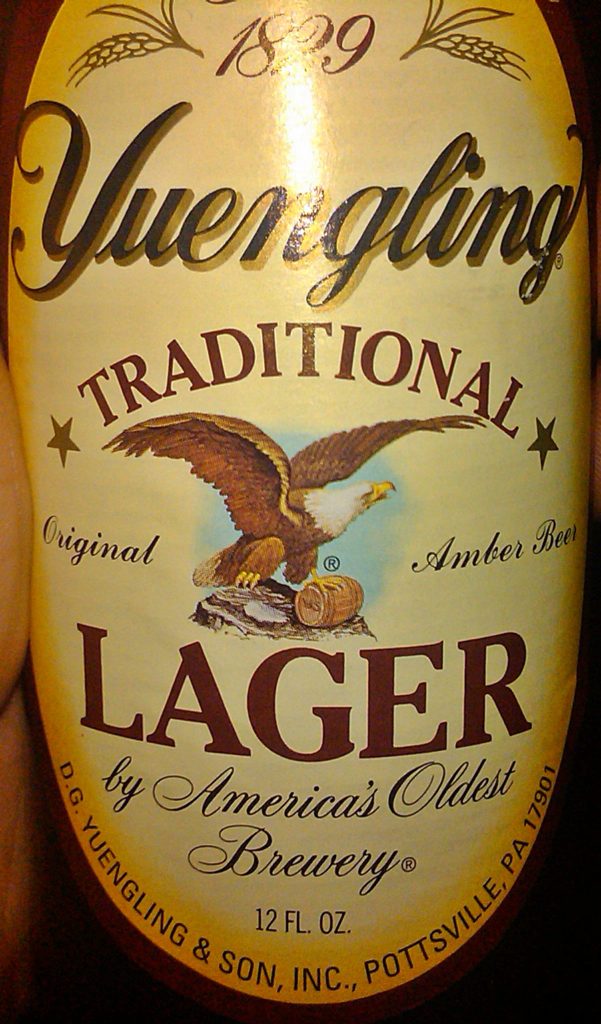 “Yuengling Traditional Lager is an iconic American lager famous for its rich amber color and medium-bodied flavor. Brewed with roasted caramel malt for a subtle sweetness and a combination of cluster and cascade hops, this true original promises a well balanced taste with very distinct character.”

Years ago, when I lived in Florida I had a roommate who was from New York.  Not upstate New York, mind you, but New York city. He rode the subway to junior high and he went to high school a few blocks from the World Trade Center. He also, aside from moving to Jacksonville, Florida, had never left New York. So when he found out I was from Illinois he asked me, “so you’ve been to Indiana, right?” Of course I’ve been to Indiana. I’ve seen football games there and I have family there. His response was, “I never really thought Indiana existed, that it was all a myth or something.”

Yuengling is to me as Indiana was to him.  I know it’s there but it seems so out of reach that I don’t believe it exists.

Here for the light lager reviews? Check out our related lager coverage including our love for Miller High Life, a Q&A with Old Style, questioning corn as an adjunct, a look at Baderbrau’s Lawnmower Lager, 7-11’s Game Day Ice and a Craft Vs. Domestic faceoff — as well as much better lagers from Territorial Brewing and Dovetail Brewery.

Yuengling doesn’t quite make it to Illinois.  In fact, its distribution doesn’t really come that close at all.  So how did I finagle a six-pack?  Essentially, I know a guy who knows another guy – who can get Yuengling.  Long story short, a friend of mine used to live in Nashville, Tennessee where Yuengling is aplenty.  A friend of his who still lives there got him a case for Christmas and I in turn traded off a six-pack of Two Brothers Cane and Ebel in exchange for a sixer of lagery goodness.  Like I said, I know a guy who knows a guy.

Was it worth it?  Does Yuengling Traditional Lager live up to the hype and mythical expectations?  Yes…and for the most part.

The first thing I found out about Yuengling is that I have actually had it before, albeit at least five years ago, and that I liked it much better before my palate had been crushed by triple digit IBU beers.  Secondly, it is better straight out of the bottle than poured in to any number of glasses I selected as a beer sipping vessel.  So, out of the bottle you get whiffs of sweet caramel and apple butter on toast.  Take a sip and you get a slightly syrupy and sweet beer with little carbonation.  Flavors of creamy caramel, biscuits and lemon zest dance on the palate before leaving you with a crisp, dry finish.

For me, this beer falls in to the same category as a Bell’s Oberon or New Glarus’ Spotted Cow.  It’s more about the experience of sipping something you can’t normally get your hands on or the emotions the beer brings about than the taste of the beer itself.

Case in point, Oberon — to me — signals the beginning of summer.

“Now you can look forward to women in sundresses, grilling on the back porch, drinking away an afternoon and baseball. Have it with an orange. Or don’t. It doesn’t really matter because it’s summer now. Want to buy it in a mini-keg? Do it. You have nothing else to do –- because it’s summer.”

Is Oberon the greatest wheat beer ever brewed? Not quite, but it does make me feel all warm and fuzzy inside when it’s first tapped and shows up on store shelves. And New Glarus’ Spotted Cow? Well, the draw to that beer is that you actually have to work for it. In order to get Spotted Cow, because it is not distributed outside of Wisconsin, I have to make an effort to get in my car and drive an hour north to pick some up. It’s all about how bad you want it.

So what made the Yuengling Traditional Lager taste so good?  I don’t know when I will ever have this beer again, which made each drop taste that much better.