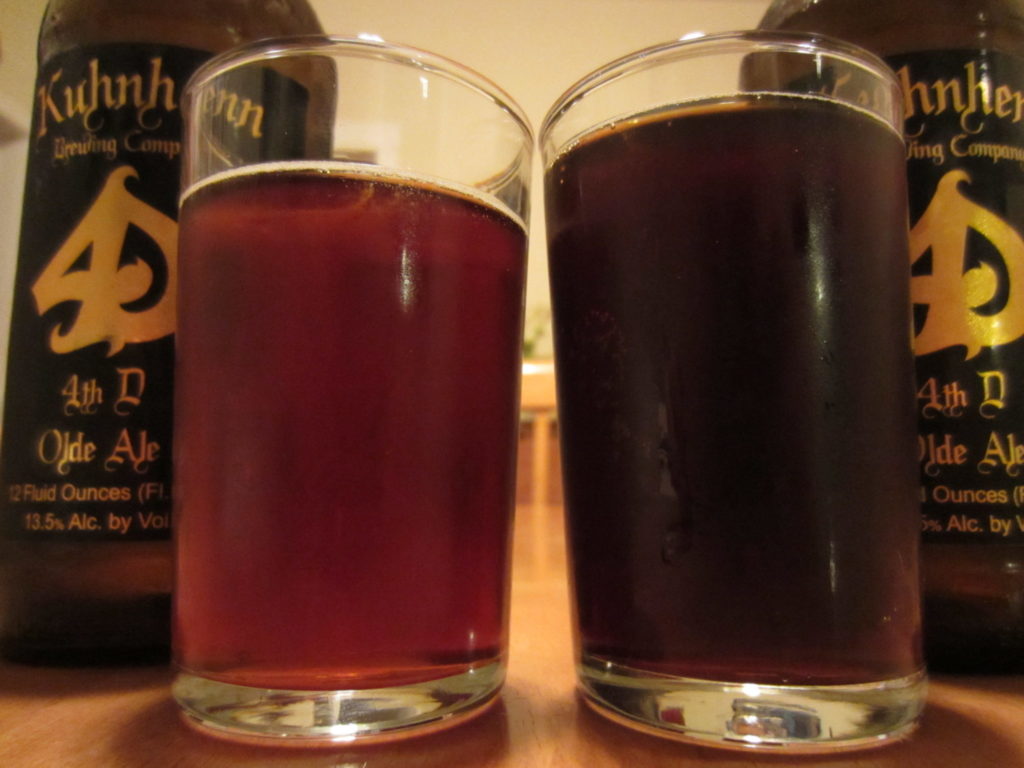 4th D is aged for a minimum of nine months before being released. This ale has an intense sweet caramel malt flavor and aroma that develops into a toffee/toasted marsh mellow like character.

(Editors Note: What you see here is a side-by-side comparison of a Kuhnhenn 4 D from 2010 and from 2011. The 2010 bottle was two years old at the time and the 2011 bottle was a year old. Below that is a review of a four-year old bottle of 2010 4 D and a six-year old bottle. We hope you enjoy reading about this as much as we have enjoyed drinking it.)

Karl: I’ll admit – I’m neither as familiar nor as much of a fan as I’d like to be of the Old Ale style. Nothing I’ve tried has ever really jumped up and grabbed me and said “This! this is what an old ale can do!” Words can’t quite paint a picture of how dramatically my mindset on Old Ales was shifted by these two beers, because holy hell, wow these beers were crazy-go-nuts, but I’ll try.

I tried the ‘10 Kuhnhenn Fourth Dementia first, because why not, and the first sip had my trying to wrap my brain around exactly what this beer was even doing. Gargantuan and hefty, this beer explodes on contact and leaves nothing in its wake – at 13.5% ABV one would expect nothing less.

Some “WTF” scents of seawater floated up from the glass while I tasted toffee, caramel, dark-fruit sweetness and figs, all dancing around a mid-range body with levels of taste that shouldn’t be held by a beer this dense. It’s like they broke apart physics and put it back just different enough to pack double the flavor of a beer into one liquid beverage in one bottle. 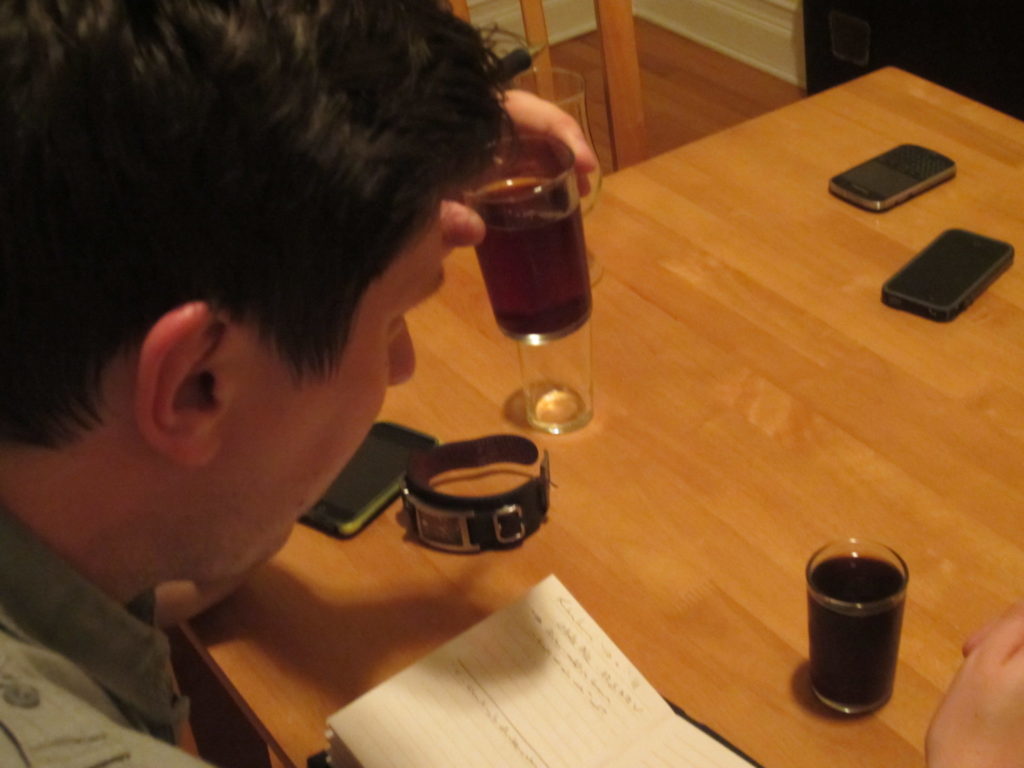 This beer is insane.

Slightly less insane but still crazy was the ‘11 Kuhnhenn Fourth Dementia, shockingly darker than the ‘10 and considerably less developed in flavor but no less intense. This beer had an unpleasant overtone of cold medicine or cough syrup leading the way down the trail to hugeness, but behind that you could see the backbone of everything that the ‘10 followed through on. We drank a lot of beers the night we tried this, but these were the beers that I was tasting all throughout the next day – they held on tight and didn’t let go a bit.

I’m almost afraid to recommend it, as I feel it might be too strong for nearly anyone. You know how 2nd Amendment activists will acknowledge the need to keep grenade launchers and M60’s out of the hands of the public? That’s kinda how I feel about entering the Fourth Dementia. Only trained, licensed and permit-carrying beer drinkers should attempt to handle. 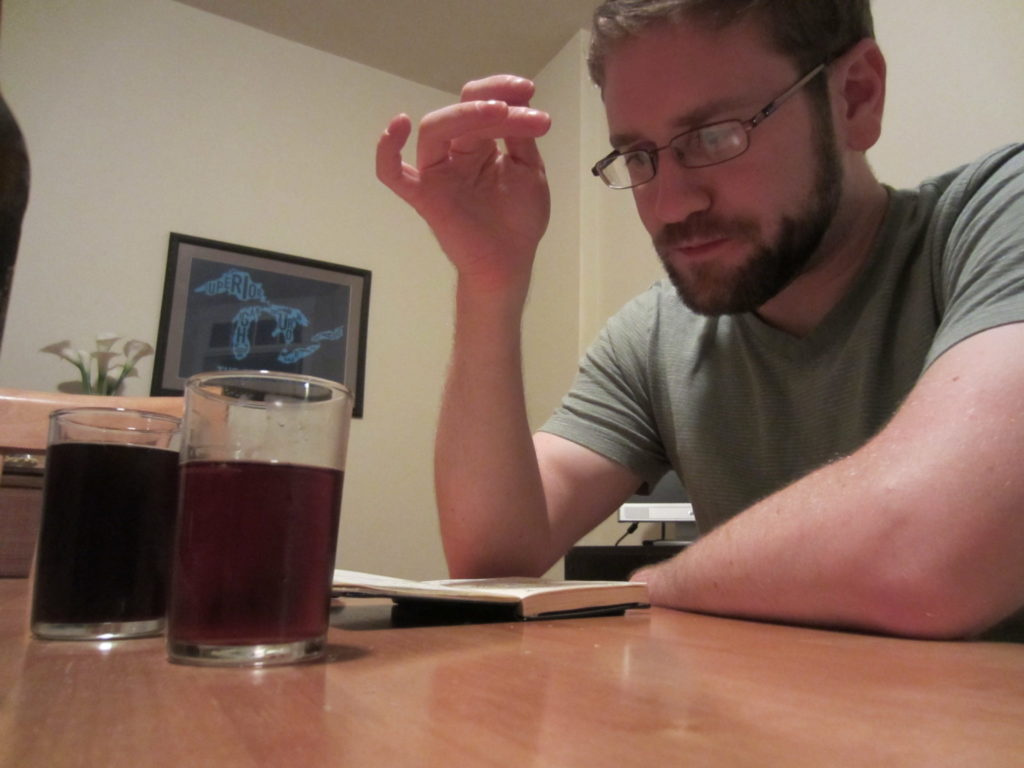 Ryan: To put this beer into perspective for myself I looked back on my unpublished notes of a fresh tasting of the 2010 Kuhnhenn Fourth Dementia. And even fresh as fresh can get this beer is nothing short of magnificent.

Fresh out of the bottle you’re greeted with loads of vanilla bean, sugar cane, caramel, marshmallows and Werthers on the nose. It’s overwhelming, to say the least. The flavor profile follows through with huge notes of toffee, caramel, raisins and fruit cake.

Now that you have the same perspective I did, let’s see how the 2010 Kuhnhenn Fourth Dementia is drinking two years later and what a roughly year-old 2011 is doing now.

Right out of the gate, with a two-year old bottle of the 2010, you get a feel for the ludicrous complexity of this beer. The aroma coming out of the tasting glass is huge on the dark fruits. The smell itself is almost cloying. And you get much of the same on the palate. In no particular order I picked up; dates, plums, figs, chocolate covered cherries, caramel, toffee and – strangely, banana and clove.

The body was creamy but also carried a sharp acidity with it too. Strangely, the 13.5 percent ABV was hard to pick up, likely masked by the intensity of everything else happening in the glass. 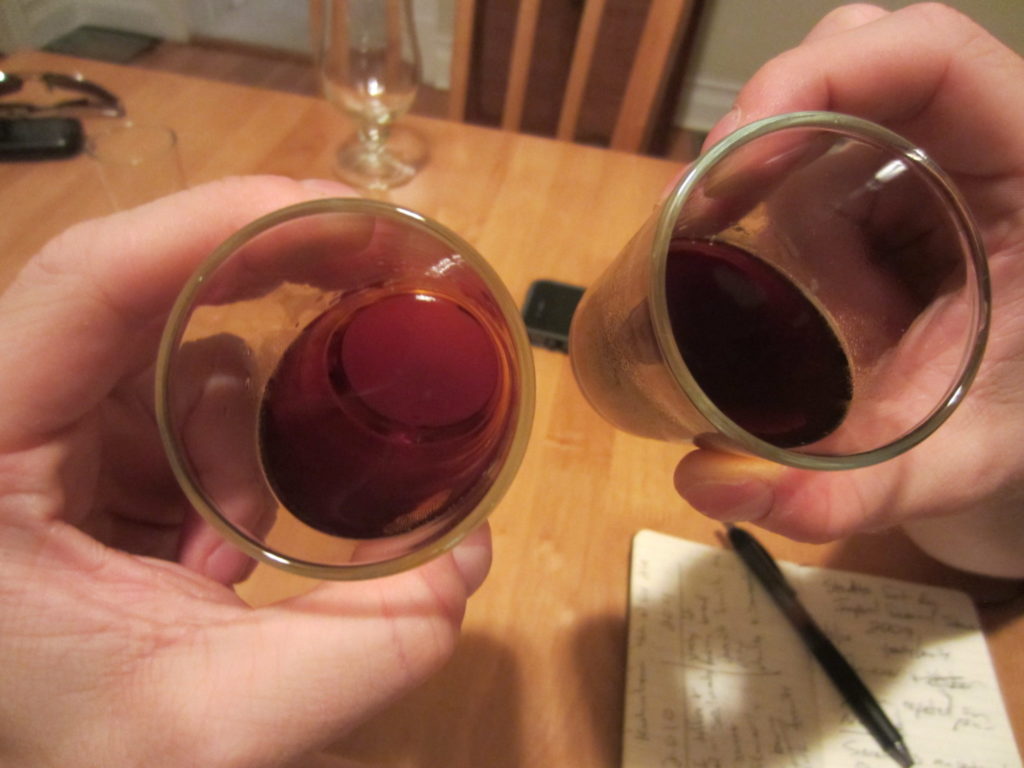 I fully expected the 2011 to be either an angrier version of the 2010 in terms of acidity and alcohol harshness or bolder with bigger flavors – if that’s even possible. While the two were a tad alike, the 2011 had its own vastly unique aromas and flavors.

The first to grab my attention was the nose; full of graham cracker, marshmallow fluff and a bit of chocolate. Essentially, this smelled like a S’more. Take a sip and you get a S’more with a fine box of chocolates on the side – bitter dark chocolate with a creamy vanilla nugget center.

Each beer was remarkably complex, highly drinkable and incredibly intense all at once. 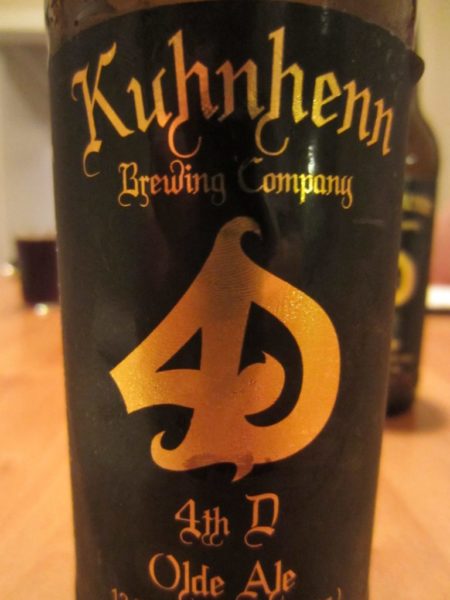 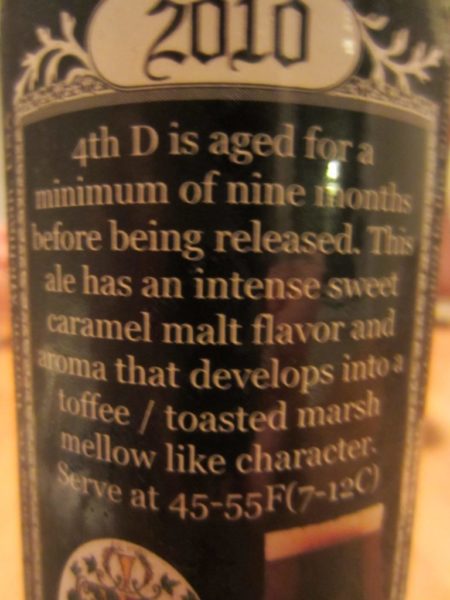 Ryan: After reading back through our thoughts from two years ago I was hesitant to write an updated review of this beer. I’m not sure I can top what was written before. But try I must, because this is still a remarkably good beer that has lost little steam after four years in the cellar.

Despite the extra age, the nose on this beer is still reminiscent of a fresh bottle and a two-year-old pour; toffee, more Werthers candy and a distinctive aroma of marshmallow fluff. Let it warm and you’ll catch a bit of plum and black currant — but without the “cat piss” aroma that traditionally accompanies the latter. I guess that would mean it didn’t smell that much like black currant, but I wrote it down so it’s going in.

A near carbonation-less body that’s thick and slippery carries heavy flavors of caramel, toffee, plums. red grapes, marshmallows and graham crackers. The tail is long and sweet and the 13.5 % ABV is absolutely nowhere to be found.

Kuhnhenn Fourth Dementia has held up phenomenally well in the cellar and, while it doesn’t seem to be getting any better, it’s also not getting any worse. We have one bottle left of what may go down as our favorite cellaring experiment to date.

I’ll probably give it another two years — maybe longer. This one is definitely worth saving and savoring. 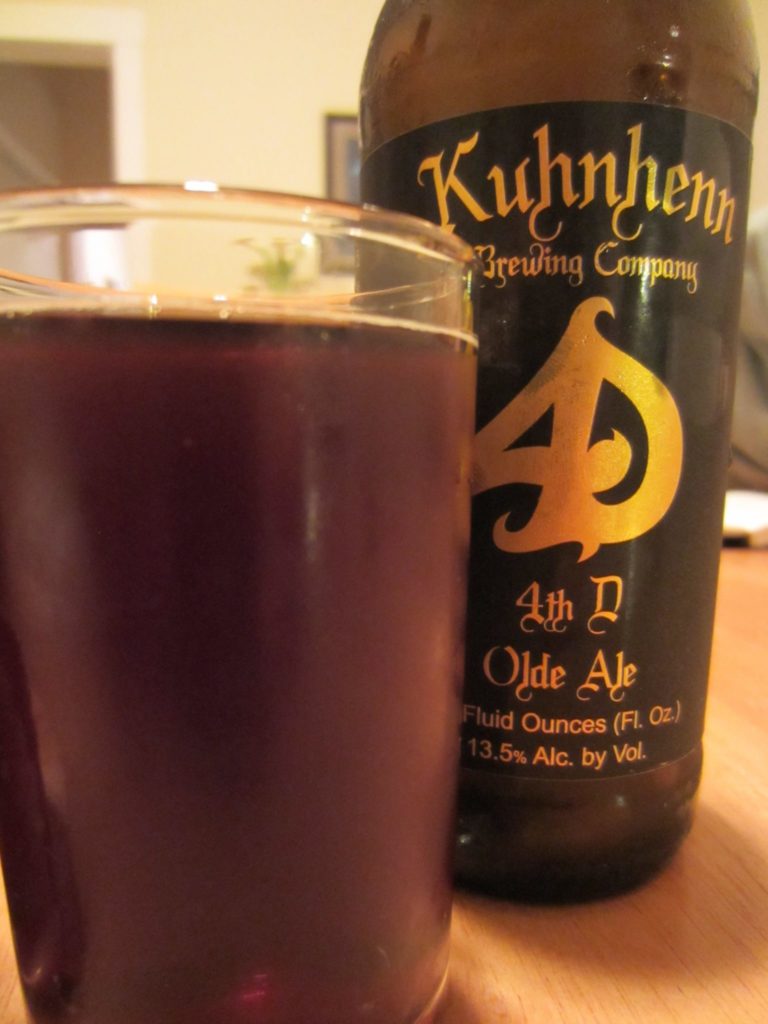 Ryan: Every so often a benchmark beer comes along that bends styles but doesn’t break them, and brings even a small sense of purpose to nearly 10 years of cellaring beer. Kuhnhenn Fourth Dementia is one of those beers.

The 4D has faded some since we last cracked one open in 2014 and some of the aromas and flavors I’ve enjoyed over the years have been lost to aging. But even after six years in the cellar, this is still drinking well and the added age has unearthed a few new flavors and aromas.

Right off the bat the appearance and mouthfeel are vastly different from previous pours. There is no carbonation whatsoever and a once syrupy and slick body is a little flat and thin. Even without a slip-and-slide to carry the flavors, there’s still plenty to like about this old ale. We’ll start with the nose, which is a blend of warm, gooey caramel and fruit cocktail.

Sticky toffee, marshmallow fluff, black cherries and candied plums carry across much the palate with a little hint of red grape in the finish. I didn’t pick up much alcohol off the bat but as this beer warmed a slow but hefty burn developed after each sip. The warmth didn’t distract from the six-year old pour, instead it helped accent the dark fruit flavors.

This was a mighty fun cellar pull. And even though I missed the sweetness of a four-year old pour, this go-round certainly didn’t disappoint. A benchmark beer indeed.

From The Cellar: Kuhnhenn Fourth Dementia 2010 was last modified: August 25th, 2021 by The Guys