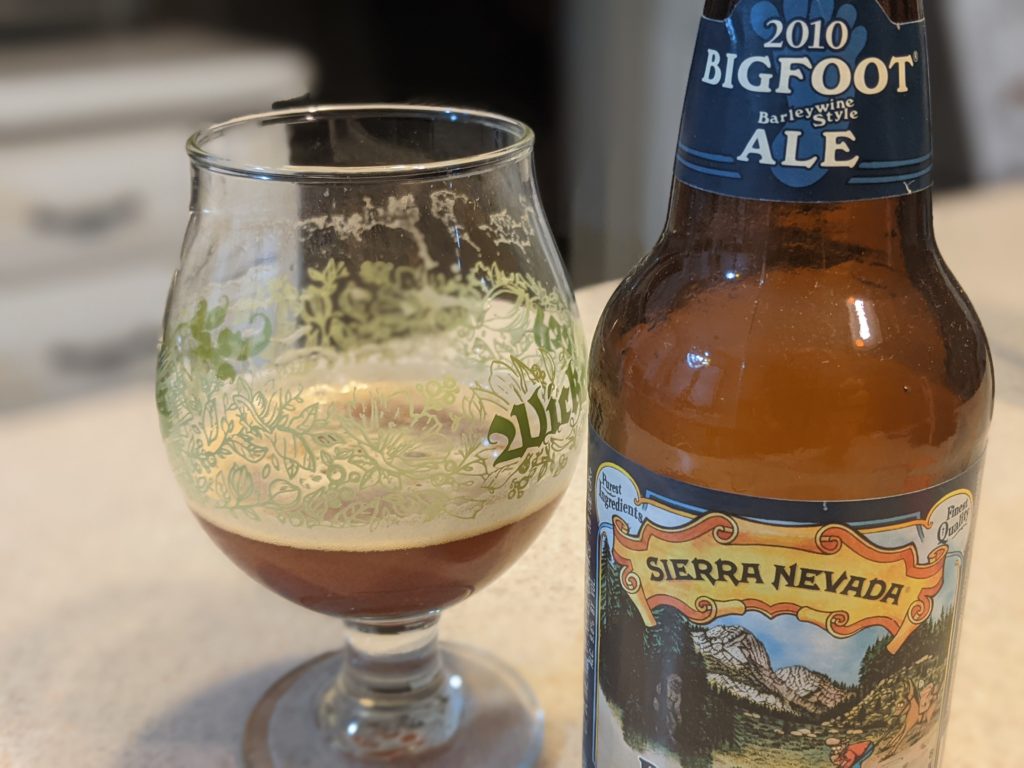 There won’t be any joint tastings for a while, so I might as well do something with this beer

I’m sitting here in mid-December sipping a 2010 Sierra Nevada Bigfoot Barleywine, picking up where I left off on this post – which was just to drop in a headline and subhead – back on…

My office closed down in early March, one week before the state of Michigan ordered non-essential businesses to close up shop and have their employees work from home. It was about the same time my children’s school abruptly and understandable switched to virtual learning.

At the time I thought I’d have some extra time for recreational writing.

Clearly I underestimated how hard it would be to help two kids learn virtually on Kindle Fire’s while keeping a two-year-old occupied so they could focus on their school work. Oh, and then there was finding time to actually do my job and my wife to do hers.

I know we weren’t alone. The first few months of the pandemic were brutal for working parents, and continues to be.

So this post sat in drafts for seven months collecting dust. To be perfectly honest, I had no idea what to write anyway. Because this post wasn’t just a preview of content to come, but a eulogy too.

I picked up this bottle of Bigfoot Barleywine less than a year after the site launched. It joined a bottle from 2009 in my little closet under the stairs in the coach house I rented off the Southport Corridor. Little did I know I’d be drinking this beer a decade later. Sadly, I had bigger plans for it along the way.

GuysDrinkingBeer was built on a simple foundation of good friends and, usually, good beer. (And sometimes, not so good.) There was never fancy lighting, expensive cameras or ticketed events. It was quite literally a couple of guys sitting around drinking beer and taking and comparing notes.

There was a bit of mad scientist approach to our cellaring over the years. Take for instance, Founders Devil Dancer or Dogfish Head’s 90-Minute IPA. We were curious what would happen if they were cellared for a few years, and we thought maybe other people would be too.

And then we started building verticals.

For me, stockpiling bottle after bottle wasn’t about having the beer. It was about sharing it. The initial founders – myself, Karl and Andrew – would get together once or twice a month to sample whatever vertical was queued up to drink next. We’d take turns playing some iteration of Call of Duty and pass around the controller between pours.

We brought others into the fold, like Matt Gebhardt from the former 4 Paws Brewery and David Kelley from Blue Nose Brewery, which recently announced it was closing up shop. We even took the show on the road, including a visit to 4 Paws and a pop up vertical tasting we did at The Green Lady.

Andrew stepped away from the site. My family and I moved to Michigan. All of a sudden we were scattered. We added and subtracted writers, people got married, had kids, moved again. But we never had another tasting. Yet, I kept picking up bottles.

Fast-forward six years and I am still holding on to more than a dozen bottles each of Sierra Nevada Bigfoot Barleywine and Celebration and North Coast Old Stock Ale – and I didn’t want to drink them.

I guess I was holding out hope there would be one more night of Call of Duty and small pours.

Back to this bottle of Sierra Nevada Bigfoot from 2010.

The nose is a mix of pinecones, caramel and apple butter. Stone fruits lead the way on the palate and surprisingly strong carbonation carries waves of slightly bitter and piney hops before finishing with a touch of pineapple and orange peel.

So what will this series look like moving forward? No clue. Maybe it will be reviews of each beer or maybe some will be clumped together.

All I do know is I’m still going to be hunkered down for the foreseeable future, so I might as well drink some good beer while I am.